I've been having a little Fimo renaissance lately. Partly due to using some Fimo for the nightlights I've made, but also from seeing some of the other wonderful things people like Joo Joo have made.

I saw a little guide on making photo stands out of plastic toy dinosaurs and magnets and thought that I could do the same using Fimo. I ordered some tiny magnets online, that had a 300g pull - enough to be quite strong, but not so strong they'd cause any injuries! I also got hold of a few more varieties of Fimo and set to work: From left to right, there's an apatosaurus (green - aka brontosaurus), stegosaurus (yellow), tyrannosaurus (purple) and a triceratops (red).

You can see a better view here of the apatosaurus and triceratops holding the card, showing that they are made of two parts held together by the magnets: Each dinosaur was moulded from Fimo in one piece first. I then placed them in the fridge for a few hours to make the Fimo harder - so it wouldn't deform when cutting. I then used a "tissue blade" (a very thin long blade) to cut the dinosaurs into halves before baking in the oven. I then carefully out out holes for the magnets in each half - taking care to make sure the magnets were aligned correctly. Initially I used epoxy glue to glue the magnets in place, but later just opted for super glue, as it dries much quicker and was just as strong.

After the magnets were glued and the glue was dry I painted eyes, mouths and a few other features (e.g. yellow horns on the triceratops) with acrylic paint. I then used some matt varnish to protect the paint work.

I also made sure that the magnets were all aligned the same way so you could make mix'n'match dinosaurs, like an apatatops and a tricerasaurus: 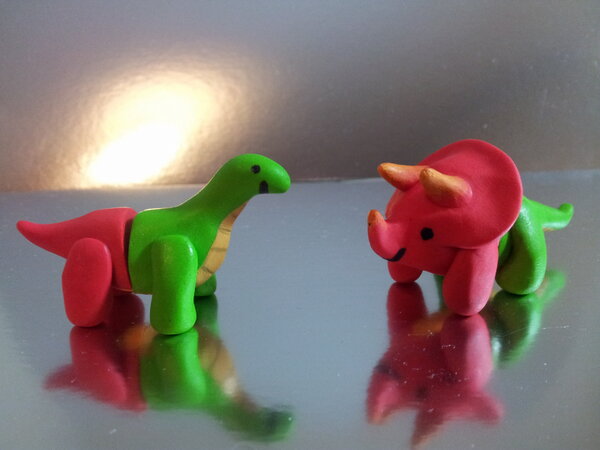