After I got my Arduino I felt the urge to brush up on my general electronics knowledge. The last time I'd really played with any circuits was back in about 1994 when I was studying my Technology GCSE - which now is quite a long time ago. So I picked up a copy of Make: Electronics and started reading through it. Sadly I was a bit lazy and just read through the book, rather than actually building many of the circuits suggested. It did come in handy for tips on soldering and I do intend to go back and make some of the circuits - I just got a bit distracted by a new arrival. However the last chapter covered microcontrollers and in particular the Picaxe 08m chip. This really piqued my interest!

The 08m is massively less powerful than an Arduino. It has 512 *bytes* of program storage and only 14 *bytes* of variable RAM. However it has 5 outputs/4 inputs and can run a single servo. In fact I could have used it for the logic part of my Arduino doorbell. It's not quite as friendly to get started with as an Arduino though. You need to wire up a simple circuit before you can get going. In fact I actually had to solder together a prototyping board, as I didn't have much luck trying to used a breadboard. The circuit needed isn't that complex (assuming you use 3AA batteries for power). The cost of the 08m chip is less that £2. The proto-board is £2, so altogether you can have a simple usable microprocessor for less than £4. It's also small and doesn't use much power. So for projects where an Arduino is overkill it's perfect. To make testing out circuits easier I also added a female header to the board, so I could plug in breadboard jumper cables (in the same way as one does with an Arduino Duemilanove): To verify everything worked I wrote the "hello world" program of microcontroller world, a program that simply blinks an LED (by turning pin 1 on and off):

That's Picaxe BASIC by the way. Maybe not as pretty as C, but for a processor with only 14 byte sized variables it's more than enough.

Then I wired up an LED into the prototype board, along with a small current limiting resistor: 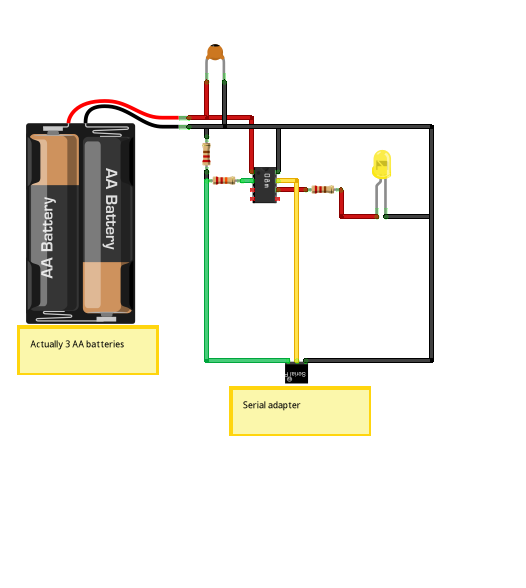 Using the Mac version of AXEPad and the Picaxe USB serial cable (which has a stereo socket at one end) I uploaded the program to the 08m chip and saw the LED blinking once every second. I've recorded a video of the programming, which should show how straightforward it is:

I've got a few projects in mind that are actually space/weight constrained and one in particular that might put the parts involved into extreme peril, so having the option of using a very small and cheap microcontroller is very appealing. I'll reserve the Arduino now for projects that need it's extra power and amazing flexibility.