For some reason I got seized by the idea of creating some electronics for our Halloween costumes this year. In previous years I have gone as far as dying my hair green for Halloween, but that is just an evening's work. This year we were having a more sedate affair - it being our first Halloween as parents.

We settled on making spider costumes. Basically black clothing, with extra arms made out of tights. I then decided that as spiders have eight eyes that making some hats with six extra eyes would make sense. After initially thinking I would just hook up some LEDs straight to a battery I decided to massively complicate matters by and try to make them blink periodically (at random).

So for this act of over-complication I chose to use the PICAXE 08m microprocessor. The core circuit (minus ability to program) is essentially just 3AA batteries, the chip itself and two resistors - so at least for a circuit involving a microprocessor wasn't that byzantine. That is kind of the point of a microprocessor though. To the end-user it hides it's internal complexity away. I don't really need to know how many hundreds or thousands of transistors it contains internally. I only need to think about how it fits into my circuit.

I chose to have six LEDs to create pairs of "eyes" that would blink in tandem. This meant the PICAXE chip would turn three output pins on and off at random intervals. With a 4.5V power supply two LEDs wouldn't need a massive current limiting resistor - 100Ohm would be sufficient. So the circuit consists of the 08m chip, two resistors (10KOhm and 22KOhm) to pull-down the serial-in pin, a 100nF capacitor to even the power supply, six LEDs and three 100Ohm current limiting resistors: 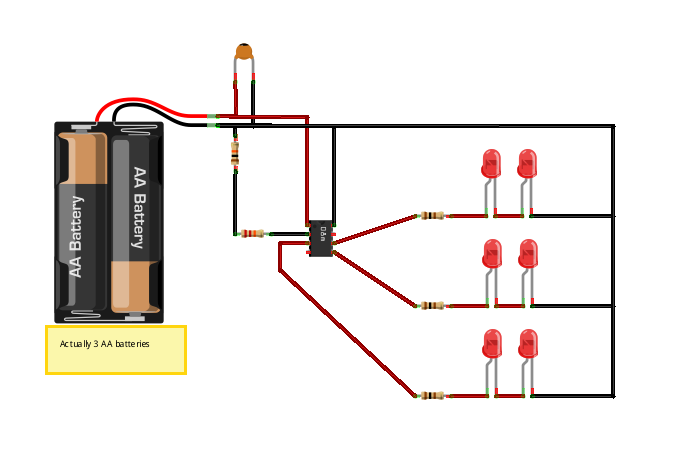 It's not actually that complex a circuit, but spending several hours soldering it up (twice) for a couple of hours at a party might have been overkill. Still it was good practice. I also got to try out fitting everything into some project boxes and generally making things look "proper". I used perfboard for the finished circuit, with some holes enlarged to accept screws for the project box. I also added some extra holes so I could loop the power and LED wires through. This helped to make the connections nice and sturdy.

The chips were programmed using a different circuit, with the serial adapter attached and were then removed from their sockets and inserted into the soldered circuits. The two hats had slightly different programs uploaded to tweak the speed and random nature of the blinking (so they wouldn't be too similar). The code is viewable at my picaxe08m repository on github (as well as a Fritzing file for the circuit). I did encounter a bug in the PICAXE compiler whilst writing this code. When I started using subroutines (and the gosub call) MacAXEPad would suddenly say "Hardware not found" when attempting to upload. Apparently this problem only affects the Mac version of AXEPad. Luckily there was an easy fix - simply adding a dummy sub-routine at the end of the file: The finished result looked a bit goofy, but it did work. The main problem though was that it only really worked when the light was low. Not a bad problem for halloween I guess: